The Belleville Running Club has entered teams in the River to River Relay since 2006.

The BRC has three teams entered in the 2020 River to River Relay.

Details on the race:

April 18, 2020 (we will go to Marion on 04/17 and return on 04/19)
Race website: http://rrr.olm.net/
There are still spots open. Register for one of the BRC teams at: Registration: http://bellevillerunningclub.com/river-to-river-relay/rrr-2020-brc-signup-form/

The 2006 River to River Relay was our first foray into the race. We were clueless. All we knew was that the race was an 80 mile relay split between at least 8 runners. How hard could running 10 miles, broken up into 3 segments, be? After all, most of us had run marathons. We eventually struggled through the hills and “finished” with a time of 11:40:10 The hills weren’t any easier, but we did much better. The 2009 race was our fourth year and we felt like veterans. The River to River Relay took place on April 17, 2010. We entered 3 teams and all 3 teams performed well. Our fastest team finished 26 (out of 236) and won the running club division. This was the fourth year that we have participated in the relay. Check out the River to River Overall Results and Special Division Awards for our results. If you’re curious, here is a spreadsheet of our times broken out per runner.

We really need to write something here. But, what happens at RRR stays at RRR. Pat…I won’t say anything at all!

Three teams in 2015. The thunderstorms cut the day short for two of our teams, but it was still an awesome time!

Two teams in 2018. After nearly 80 miles of running, our two teams finished within a fraction of a second of each other. Both teams finished at 10:50:48. 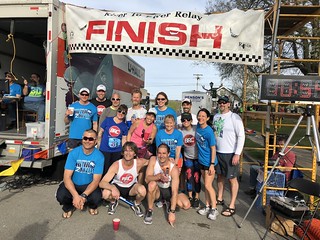 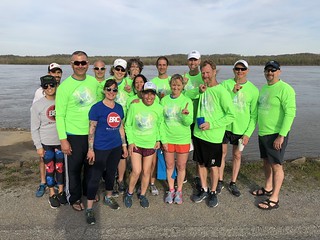